The Lambda Business and Professional Club of Winnipeg was founded in 1988, when Doug Nicholson and Bill Doyle met to discuss the idea of forming an organization that would bring together the gay and lesbian businesses and professionals of Winnipeg. Doug Nicholson, Certified General Account and Bill Doyle, Lawyer, were self-employed businessmen serving a large number of individuals within the gay and lesbian community. Under this leadership, the Club began.

Meetings were held every second month at a local restaurant. Members were recruited through word of mouth. The criteria for membership were: being a member of the gay and lesbian community, and either owning or operating a business in Manitoba or working as a professional in Manitoba.

The membership grew moderately, from four to eight members during the first year, until we reached about 40 men and women. Since then membership has fluctuated, but is recently on the resurgence.

In 1993 the Club sponsored the first MAGIC awards. MAGIC stands for Manitoba Achievement (in the) Gay Community, with ‘involvement’ squeezed in to make the name “Magic”. The MAGIC awards recognized the significant contribution that certain members of the community make toward our well-being, advancement and image in the community. Awards are presented in various categories such as Arts and Entertainment, Volunteerism, Community Involvement, and Business – to name only a few.

1996 the Gay and Lesbian Business Fair was held in Augustine United Church. Twenty-two businesses and professionals set up displays of their products and services and about 145 people attended the fair. In addition to this, several members spoke on the topics of Medicine, Tax, Law, Computers and Real Estate.

In 1999, the name was changed from ‘Club’ to ‘Association’ to reflect the increased membership and to denote ‘all-inclusive’ participation from not only gay and lesbian members but to include gay and lesbian-friendly members as well.

In 2013, the Board of the Lambda Business and Professional Association of Manitoba decided to form the Manitoba LGBT* Chamber of Commerce in order to more clearly articulate a vision and mandate. This change was announced and the new brand was unveiled in Fall 2013. In early 2014, the Manitoba LGBT* Chamber of Commerce Inc. was incorporated as a federal not for profit corporation operating in Manitoba.

Why did we call it Lambda? 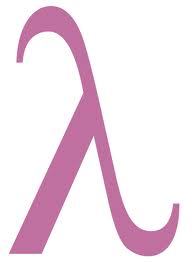 First of all, it represents scales, and thus balance. The Greeks considered balance to be the constant adjustment necessary to keep opposing forces from overcoming each other. The hook at the bottom of the right leg of the lambda represents the action required to reach and maintain a balance. To the Spartans, the lambda meant unity. They felt that society should never infringe on anyone’s individuality and freedom. The Romans adopted the letter to represent “the light of knowledge shed into the darkness of ignorance.” Finally, in physics the symbol designates and energy change. Thus the lambda, with all its meanings, is an especially apt symbol for the gay liberation movement, which energetically seeks a balance in society and which strives through enlightenment to secure equal rights for homosexual people. – From More Man Than You’ll Ever Be by Joseph P. Goodwin (Indiana University Press:Bloomington, 1989) on page 26.