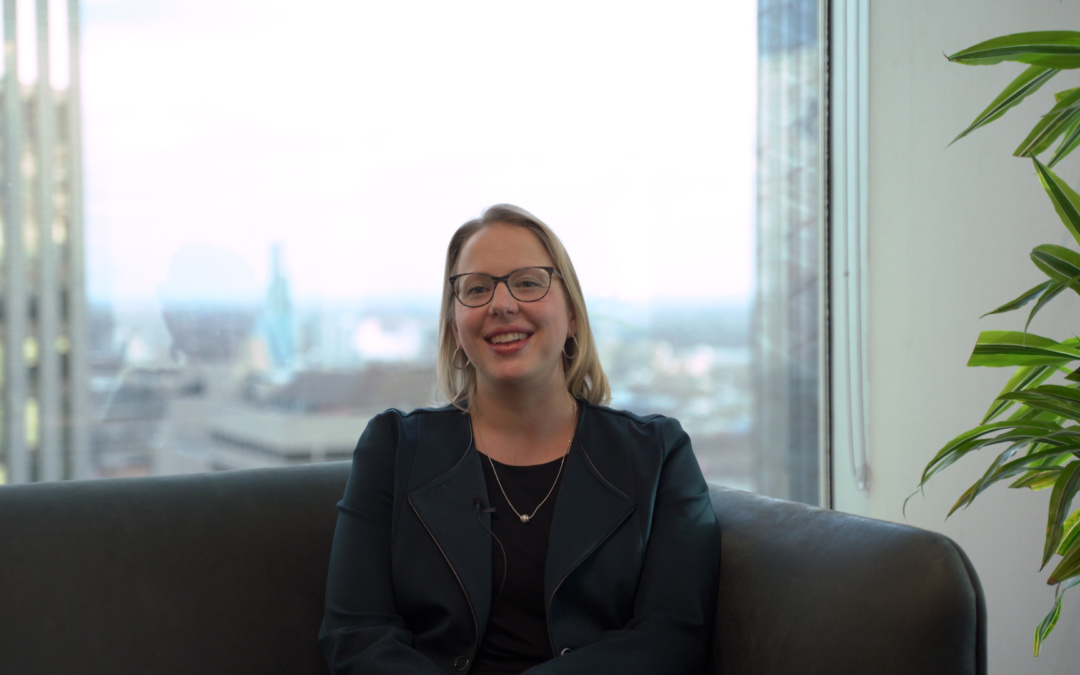 This award recognizes an individual who is making a significant contribution to Manitoba’s two-spirited and LGBTQ communities and the business community at large.

Congratulations to Robynne Kazina our 2020 recipient of the Community Builder Award!

Robynne is a lawyer at Taylor McCaffrey LLP who holds a strong desire to use her legal skills to promote equality and address injustices – one of her main motivations in becoming a lawyer.

As a young lawyer Robynne worked on equality in marriage case in 2004 – Vogel et al. v. Canada and she continued her work fighting for equality for the two-spirited and LGBTQ communities ever since. She also noticed a void in fertility and assisted reproduction law in Manitoba, as a result and for the need for this representation in Manitoba and took it upon herself to educate herself in this area.

Robynne’s knowledge has been recognized in reforms to law and protocols. Her input has helped streamline the process for declarations of parentage with the courts and birth registrations. Her consultations with the health-care community have led to better use of language and treatment of two-spirited and LGBTQ parents involved in birth and/or surrogacy cases in Manitoba’s hospitals.

She was one of the 15 lawyers (and the only one from Manitoba) who formed the Ad hoc Association of Canadian Family and Fertility Lawyers. One of the fundamental principles guiding the group’s work was that the LGBTQ2+ communities should not suffer discrimination, or be denied reasonable access to willing altruistic Surrogates and ova donors.

Robynne was also involved in a Constitutional challenge to The Family Maintenance Act on behalf of seven LGBTQ couples. This pro bono case seeks to have the definition of “parent” changed so that couples who had a child through assisted reproduction shall both be deemed to be the parents, notwithstanding biological connection, and that they have all the obligations and rights as parents under law. This would avoid the current need in Manitoba for two-spirited and LGBTQ parents to adopt their own child!

Robynne’s efforts at championing equality go beyond her legal involvement. She has heard countless stories of members of our communities feeling alone and isolated in their path to become parents. For example, almost all of the gay men she worked with had never met another couple who had a child via surrogacy, which made them feel more alone in navigating a complex and difficult system. Robynne organized a community event for parents who have had children by way of assisted reproduction which was attended by approximately 60 parents, surrogates, donors, and their children. People came from all over Manitoba, and the administrator for a fertility clinic in B.C. flew in specifically for this event.

Robynne’s advocacy and action taken benefitting our communities, and the community at large, is truly remarkable and far-reaching, thank you for everything you have done and continue to do for our community.